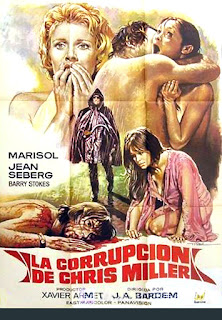 The Naschycast returns for October! Barely. And we work diligently to NOT spoil this film for newcomers!

THE CORRUPTION OF CHRIS MILLER (1973) is one of the most overlooked and least talked about of the Spanish horror films of the 1970’s. In a way this is good because its rarity leaves its many secrets and revelations unknown to modern viewers. There’s a good debate to be had about how the film should be labeled. Is it a thriller or a horror film? Often the line between those two symbiotic genres can be teased apart but I think this film straddles the fence right up until the mid-point farmhouse set-piece. That is a sequence that is sure to impress even the most jaded of horror fans! Mark this film down as another precursor of the slasher genre.

We start off this show with some news and a sad goodbye to a good friend and contributor to the podcast. As stated, Troy and I do our best to not spoil the many third act disclosures that twist this amazingly well written thriller into new and wholly unexpected shapes. We talk a little about the three actors at the center of this pressure cooker drama with some attention to the earlier careers of the two female leads. Jean Seberg is a screen legend with a dozen films on her resume that would be the highlight of any actor’s life. The lovely Marisol is great here but it’s fascinating to learn of her very successful music career as a young woman. And we speculate that Barry Stokes may have been asked by a British director to essentially play exactly the same role he does here in a later film. I’d love to find out how much this movie influenced that 1977 picture. We marvel over the fine direction and cinematography, the sharp dialog and nuanced characters as we strain to keep from discussing the end of the story. It is not easy!

If you have any thoughts about THE CORRUPTION OF CHRIS MILLER or anything else we discuss in this episode please drop us a line at naschycast@gmail.com and we’ll include them in the next episode. Thank you for listening and we’ll talk to you again soon.