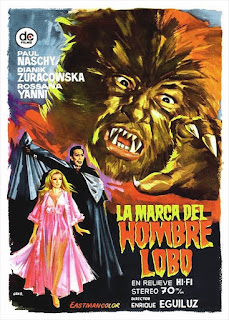 After a Summer hiatus The Naschycast is back with a new episode! This time out we have invited fellow podcaster and author Nic Brown to stop by for a discussion of a couple of Paul Naschy's finest werewolf movies - THE MARK OF THE WOLF MAN (1968) and DR. JEKYLL AND THE WEREWOLF (1972). Nic is one of the co-hosts of the legendary B-Movie Cast and, although they have occasionally covered wolfman films over there, this is the first time he has been able to dig into a Waldemar Daninsky double feature. Of course, the fact that Nic has famously written a couple of novels centered on a lycanthrope (The Werewolf For Hire series) just adds to the fun and explains why we wanted him to talk about our favorite Spanish Hombre Lobo. Needless to say, he finds the Naschy version of werewolfery to be very different from the cinematic standard we all know and love. 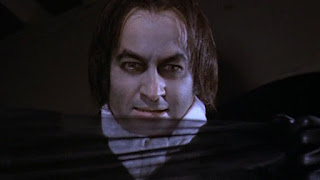 Although the three of us do occasionally get off topic we do dig into things pretty well. We discuss Nic's favorite werewolf films; dig into the mystery of the alternate FRANKENSTEIN'S BLOODY TERROR title for MARK OF THE WOLF MAN; delight in the fact that both of these films are monster mashes with multiple creatures going at each other and we marvel at the creativity on display to get Mr. Hyde and the werewolf into one body! Also, we chew over the bizarre dance of the seven vampires sequence in MARK with new and improved (?) ideas suggested for this most insane stalking/seduction technique. Nic makes note of the logical reasons for the wolf man's most common form of attack while I wonder if maybe neck meat is simply considered an appetizer in the lycanthrope world.

After we conclude the movie portion of the show and I take the time to answer a few listener emails. There are some kind words and a few suggestions for future films to cover with a strong push toward those evil knights Templar, so look for a return to that beloved series soon for the show. If you have any comments or questions for us the email address is naschycast@gmail.com and we're always glad to hear from you. We can also be reached over on the FaceBook page where we post up information and cool links focused on Spanish Horror whenever we can. Thanks for downloading and listening to the show!

Posted by Rod Barnett at 7:51 PM No comments: