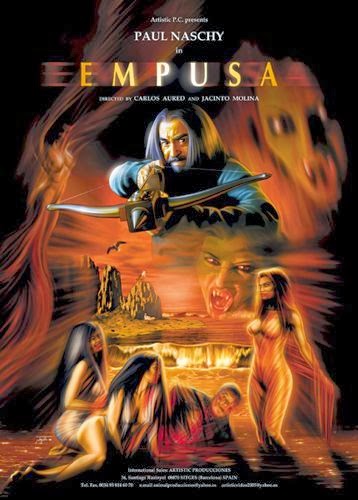 In this episode we venture once again into the twenty first century to witness Paul Naschy's final directorial effort - EMPUSA. Unlike his earlier work this is a film we know little about with next to nothing being stated by our hero before his untimely passing. We do know that this project started as a final collaboration with director Carlos Aured (HORROR RISES FROM THE TOMB, CURSE OF THE DEVIL) but it appears Naschy completed the film when his friend's health wouldn't allow him to work.  From what we can learn, the bulk of the movie was shot in 2007 or 2008 but it went unreleased until 2010.  There might be a good reason for that! We suspect that additional footage was shot after the fact and damn- do the seams show. It is pretty great to see Naschy teamed with old buddy Antonio Mayans, though.

Join  and I as we chop this horror/comedy (or is it a comedy?) down to size and attempt to understand just what the hell is going on. I think you'll be able to hear the pain! As usual, the conversation darts all over the place with zombie novels getting some love from me but things really go off track in the mailbag section. Questions are asked and answered with some great thoughts and ideas coming from our loyal listeners. If you have any questions or comments you can drop us a line at naschycast@gmail.com or join us over on the NaschyCast Facebook page on the book of faces. Oh- and feel free to donate to the podcast if you think the show is worth a few shekels by using the Donation Button on the left side of the NaschyCast Blog page. Thanks to Mike for reminding us that its there!

Posted by Rod Barnett at 4:27 PM No comments: