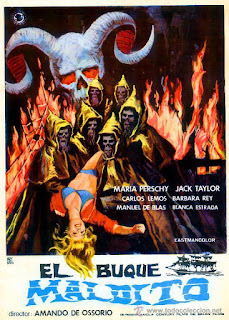 The new year starts with a shiny new episode of Beyond Naschy! Finally returning to the cinema of Amando De Ossorio the NaschyCast dives into the waters of the North Sea and are surprised to find that the Blind Dead lurk there waiting for fresh victims. The third of this classic Spanish Horror series is called THE GHOST GALLEON or HORROR OF THE ZOMBIES or THE CURSED SHIP but under any title it is a problematic film. Seeking to add new ideas to his signature creation Ossorio puts his Undead Knights Templar on an 18th century galleon that seems adrift in both the oceans and time itself. Only occasionally visible in our world this ship encounters unlucky sailors or tourists and, in this case, it happens to bump into a pair of bikini clad young ladies looking to set a ridiculous publicity stunt in motion. As you might expect, things do not go well for them or their intended rescuers. The satanic living dead rarely seem to take pity on people no matter how cute they may be.

and I deep dive into this one with the hopes of changing our original poor impressions of it. Do we come to love this film now or has age still not scraped the barnacles off this dark hulk? Listen in and see! We talk about the film's rushed production and it's multiple titles while also letting listeners chime in with their thoughts as well. We discuss the possible symbolism present in the movie and spend some time picking over the film's troubling attitude toward women. The wacky professor character shows us how to be a very strange fellow but somehow also the most useful member of the crew. Who knew that a flaming crucifix would help hold off the Blind Dead?

The show can be reached by email at naschycast@gmail.com or on the FaceBook page. We plan to ask for more input in the future over on FB so join us there for more information. Thank you for downloading and listening!

Posted by Rod Barnett at 4:42 PM No comments: