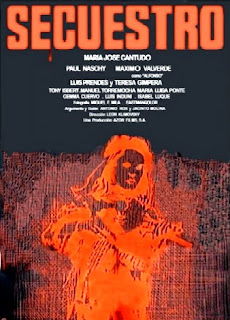 This month marks the 8th anniversary of the Naschycast! To celebrate we tackle a Paul Naschy film that neither of us have ever seen before. Many things have made SECUESTRO a difficult film to view, not the least of which is that there has never been an English language version available. Luckily, just a few months ago, some clever, talented people translated the Spanish dialog and created subtitles for fans curious to see this hard to find mid-70's effort. So - is it any good? Listen in! We go through the entire film.

This turns out to be one of Naschy's many crime films, very much in the vein of HUMAN BEASTS, DEATH OF A PRESIDENT or THE SNIPER but, this time, focused on non-professional criminals. The story is a combination of the 'ripped-from-the-headlines' idea about a kidnapping for profit and Naschy's go-to vision of himself as a cursed man trying to just survive in a world in which circumstances are always against him. The film reunites him with director Leon Klimovsky and a few actors that would play roles in important future films. Pretty kidnap victim María José Cantudo was last seen in the Naschy-Verse having her heart cut out in HORROR RISES FROM THE TOMB and would later star in THE FRENCHMAN'S GARDEN. Tony Isbert would return to the screen for Naschy in INQUISITION and DEATH OF A PRESIDENT.

We discuss the surprising strong score with Troy finding similarities to a certain hit song from the 1970's, but we'll let you decide if some thievery was going on. We question the realism of junkie shakes, the choice to make the most sadistic character gay, the wisdom of letting Naschy near your wife and the dangers of the Stockholm Syndrome. Also, I can't help but make note of the fine hairpiece(s) our star utilizes at this point in his career. we close out the show with a couple of emails and if you have any questions we can be reached at naschycast@gmail.com or on the FaceBook page. Thanks for listening!