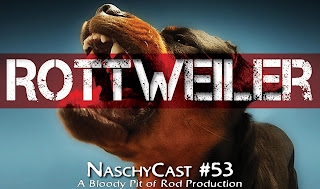 Episode 53 puts us back in 2004 to discuss a film that features Naschy in a small but impressive role as - wait for it - the bad guy! ROTTWEILER is an English language film made in  by American director Brian Yuzna during his short lived Fantastic Factory production company's existence. We start the conversation talking about the various film directed by Yuzna and segue into the other movies made by Fantastic Factory. There are some good films and some bad films on that list!

ROTTWEILER was based on a novel by Spanish author Alberto Vázquez Figueroa who also wrote the script. In cases like this I love to read the source work but I haven't been able to locate an English translation anywhere so if anyone out there has any information on such a thing please let me know at naschycast@gmail.com. I'm very curious about the novel's structure in comparison to the film and how close the story stays to the details of the book.

As usual  and I stray from our assigned path a few times to talk about other (possibly) related subjects but we keep mostly on target - I promise. The mailbag segment has some fun food for thought as we learn about a fellow Naschy fan that we somehow missed crossing paths with during our days living in  in the 1990s. Strange! And Dan returns with his segment this time out to talk about Rottweiler and another horror host. Thanks for listening and please consider donating to the show or rating and reviewing us in the iTunes store.