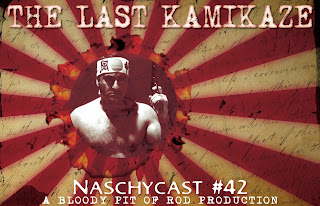 It is that time once again! After two months of talking about Jess Franco and Amando de Ossorio your humble podcasters return to the film of Paul Naschy with a vengeance. THE LAST KAMIKAZE was the last of the Japanese co-productions our Spanish cinema hero directed and, although we were upset that that it isn't a horror film, we are happy to take whatever Senor Molina offers. The 1980's was a period in which he stretched his creative muscles in new directions and he seems to have succeeded more times that not. Let's just say that because of this movie I am willing to forgive the scandal that was OPERATION MANTIS. This film may have some problems but it does not make the viewer cringe in embarrassment- well- maybe only in one scene involving dressing in drag.

I must apologize for the nearly three hour running time of this episode. Part of the reason for this excessive length can be put down to both Troy and I being so thrilled to talk about Naschy again that we went a bit too in depth. But, in truth, we also ramble off topic on several occasions with discussions of Wonder Woman and Earth 2 comic books being completely my fault. Sorry about that! But the real off topic rambling comes in the mailbag section when a couple of longtime listeners raise very interesting ideas and ask our opinions on a wide range of things. We talk about the early films of Lucio Fulci; give our opinions on the Friday the 13th series of movies; talk over Christmas wish lists; get excited about the impending Blu-Ray release of DEMONS and DEMONS 2 and we even spew forth a rant or two. That's right- both  and I have a bone to pick with certain people and it comes out in the mailbag discussions. I may have cursed a bit too much in this one. Whew!

So join us for an entertaining film as we deal with some great dummy destruction, contrasting murder methods and ponder the possibility that Naschy is actually Batman in #42 of the NaschyCast. The show can be downloaded at the link below or subscribed to in the iTunes store. And if you get the show from there please take the time to rate and review it - it helps make other fans aware of what we're doing here. We can be contacted at naschycast@gmail.com or through the Facebook page. Thanks!

Posted by Rod Barnett at 3:45 PM No comments: