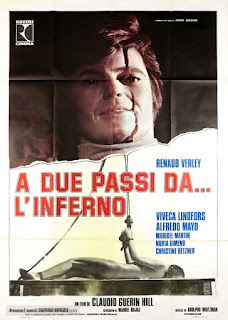 Our latest episode has us finally covering an under seen and not often spoken about horror classic. A BELL FROM HELL (1973) straddles the fence between the worlds of Art-House and Exploitation cinema taking elements from both to create an impressive fusion. It's easy to imagine this film playing to highbrow crowds seeking an intellectual vision of the fate of aristocratic families in rural under the Franco regime. But it's even easier to think of it playing in grindhouse theaters for people looking for cheap horror thrills from a film about a well planned, well deserved revenge. Luckily, these dissimilar audiences get what they want here with enough intelligence and excitement for both types to feel satisfied with this darkly comic tale. It's a creepy tale of hate, greed and lust couched in clearly symbolic terms to make comment on life under a repressive government. It'll keep you guessing right up until the end credits! 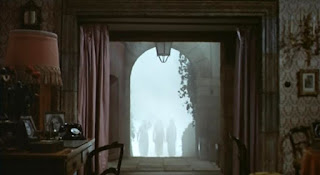 and I try not to spoil too much of this one as it is less well known than it should be. (Where is the Blu-Ray of this exceptional work?) Nevertheless, we talk about the obvious symbolic connection between the titular bell and the film's main character as we watch him released from an asylum to return home. His aunt and cousins welcome him back, with reservations, as we watch him begin a series of increasingly cruel practical jokes with a deadly endpoint in mind. We discuss the unfortunate fate of the film's talented director, the exceptional career of the screenwriter and explain that you certainly have seen some of the cast in other places. See if you can spot where I catch myself when delineating the possible symbolic nature of certain characters because I realize I might end up spoiling one of the film's nastier surprises. Sometimes my thoughts race ahead of my best intentions!

We end the show with a voicemail from a British listener which prompts us to talk a bit about Jess Franco films again. It's pretty easy to get us onto that topic, huh? If you have any comments or questions the email address is naschycast@gmail.com or we can be reached on the show's FaceBook page. Thank you for downloading and listening! Oh -and vote for us in the Rondo Awards! We'd love to win in the category BEST MULTIMEDIA SITE.

Posted by Rod Barnett at 6:18 AM No comments: