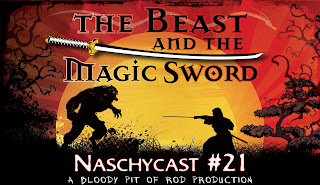 In the past I have heard some fans of Naschy claim that THE BEAST AND THE MAGIC SWORD is one of his best movies. Having spent several hours going through the film with great attention to detail I’m ready to debate that idea and so is Troy. I personally believe that the reason for the reverence this one engenders is that for decades the only way to see it was in washed out, third generation video tapes that barely hinted at the perversity and violence onscreen. Now that it’s possible to see a clear, sharp version of the film its time to reevaluate and decide where this one falls on the mighty Daninsky scale. Is it one of the best Wolf Man movies of all time or…… something else?

No matter what side you come down on it cannot seriously be argued that this film lacks boldness. Starting in the year 938 we are finally shown the genesis of the Daninsky Curse that forces every seventh son born under a full moon to become a werewolf….. or was that every son born on the seventh full moon during…….. or one son every other generation or something. I say the Hell with it! THE BEAST AND THE MAGIC SWORD starts out in Europe but quickly moves the action to 16th century Japan for the world’s first werewolf vs. samurai battles. Ya gotta love that! This is a film that seeks to combine as many disparate ideas as possible into one big lycanthrope adventure and the different elements seem to only occasionally fit together smoothly. I’m still trying to forget the inclusion of freakin’ Ninjas in the story!

Join us as we chat this one to death with tangents into The Jungle Book, Riki-Tiki-Tavi, the Spanish Inquisition, masculine facial hair, long distance travel and well staged tiger fights. The discussion is our usual in depth, scene by scene dissection that goes on for longer than either of us thought probable or possible. The body of the show is two and a half hours long with the mailbag section stretching for the last forty minutes! I hope everyone likes long podcasts.

Remember to drop us a line at naschycast@gmail.com or talk to us over at the Facebook page. If you listen through iTunes please think about giving us a review there - five stars would be nice – and, as Troy says at the end of the episode, have a Happy Halloween!

Posted by Rod Barnett at 4:04 PM No comments: 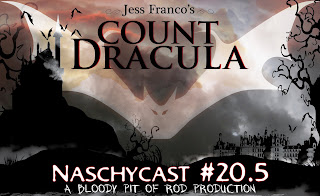 Oh my goodness! Fall weather has arrived in Tennessee and for two Euro-Horror fanboys that can only mean one thing- its time to break out the Dracula adaptations and discuss! In our second Beyond Naschy show focused on Jess Franco we talk about his moderately successful version of Bram Stoker’s classic tale of terror, blood and Victorian manners. “No sex- we’re British!”

While the consensus on this film in fan circles seems to be mostly negative we find a number of laudable things onscreen even if we are unhappy with several odd elements. The fact that the three main stars are never even in the same room is a big problem but there are a number of fine qualities on view – and we don’t just mean the lovely faces of Maria Rohm and Soledad Miranda. As an attempt to mount a faithful adaptation of the novel, COUNT DRACULA deserves to be studied. It is certainly a fine chance to see Christopher Lee speechify haughtily as the Count digs his fangs into Dracula family history to justify his arrogance and natural right to do with lesser humans as he sees fit. Ah, the joys of a self-righteous aristocracy!

As you might expect, the conversation takes many digressions including various versions of the Dracula tale in film; our continuing obsession with actor’s facial hair; Troy’s lustful thoughts about Maria Rohm; my own lustful thoughts about Soledad Miranda; Jack Taylor’s emoting; Jess Franco’s Cockney accent; quality fangs and a number of other strange and wonderful subjects. Neither of us can remember the name of the author of The Memoirs of Elizabeth Frankenstein during the podcast- which is a shame as Theodore Roszak is a great writer and his brilliant novel Flicker should be read by any fan of genre fiction. I also can’t recall the name of director Gordon Hessler for some reason. For me to forget the name of the fellow responsible for THE GOLDEN VOYAGE OF SINBAD, THE OBLONG BOX, and SCREAM & SCREAM AGAIN is unforgivable! All this and we end the show with a lengthy discussion of our favorite Hammer films. See what you can get when you write in with a question!

Send any notes, queries, comments, complaints or praise to naschycast@gmail.com or post same on the NaschyCast Facebook page. Thanks for listening!

Email ThisBlogThis!Share to TwitterShare to FacebookShare to Pinterest
Labels: Beyond Naschy, podcasts, vampires 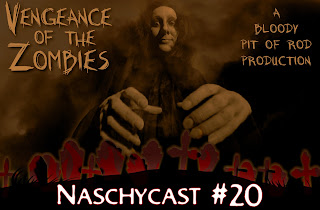 In this episode we follow Master Naschy into the world of Voodoo and check out the mad mystery born of crimes too hideous to explain in detail. Those used to the Romero style movie zombies will be surprised by these grave risen killers as they seek neither flesh nor brains to chew on and tend to only do what they are told. Rather well behaved for monsters, I guess. But that means that the thing to fear is the person creating the monsters and issuing the orders and that just might be our main man Paul Naschy- or it might be some other stocky guy running around London with wax effigies and jars of blood.

As we made clear in our comments at the end of the last episode we were not expecting VEGEANCE OF THE ZOMBIES to be a ‘good’ Naschy experience. Some listeners took us to task for that negativity but my memories of the film from my one previous viewing were less than stellar. Both Troy and I were surprised to discover that this is actually a pretty good, if flawed, horror tale with lots to recommend it. This is another Leon Klimovsky directed film and it has all the pluses and minuses associated with his work. It’s a spooky movie filled with amazing things and creepy ideas sandwiched in between some terrible scenes and lathered in a score that only occasionally seems to be appropriate to what you’re watching. Listen in as we remark on the oddest things, such as one character’s resemblance to Dr. Phibes; the possible deal Klimovsky got on rubber masks; the completely ignored live leopard sitting on a table in one scene; the romantic life of Hindu gurus; and the fact that London police have very strange crime scene practices. Also, we introduce our new sister podcast and we both manage to give the show’s name incorrectly! It’s called the Hello Doomed Show and we highly recommend checking it out. Visit the hosts over at Doomed Moviethone and tell’em we sent you!

Remember you can give us your thoughts anytime at naschycast@gmail.com and, like good southern gentlemen, we’re always glad to hear from you. Thanks for listening.

Posted by Rod Barnett at 5:53 AM No comments: 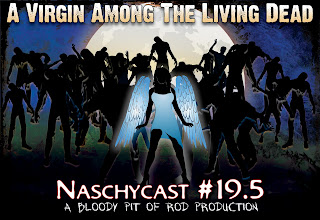 We bring back the Beyond Naschy episodes and take a cooling dip into the Jess Franco pool/pond/sewer with his haunting, beautiful A VIRGIN AMONG THE LIVING DEAD. Much has been written over the years about Franco’s oeuvre both pro and con. Aware of the possible pitfalls Troy and I try to give newcomers an idea of what to expect and how to approach this movie while exploring some of the things that make this particular film so interesting. Of course, we get off track a few times and discuss other subjects as well but overall we stay on topic this time out. Luckily this film allows for a lot of on point digression- how else could we talk about Fritz Lang, crappy VHS releases, lily pads, black phalluses, St. Cecil and the proper use of the zoom lens. One of the funnier things we note is that no matter how much the title may invoke images of shambling zombies there are none in sight- if you watch the correct version! This unfortunate expectation of undead flesh eaters is pointed out and played with in our image for the podcast. Artist Jeff Nelson took the title and created what it conjured in his imagination which perfectly illustrates why A VIRGIN AMONG THE LIVING DEAD may have been the wrong choice for a name. But was CHRISTINE, PRINCESS OF EROTICISM any better?

While some fans might point burgeoning Franco-philes to VENUS IN FURS, VAMPIRES LESBOS or FEMALE VAMPIRE as a better start point for his more difficult movies we both feel this film is the one more likely to garner a positive reaction. It sports some of the things that make his work challenging but it is also better paced and more visually inventive than those other movies. The scenes with Paul Muller as Christine’s father are cinematically brilliant and well worth seeing for any film fan. So settle in and let us try to lead you down the dangerous path of actually enjoying a Jess Franco film. You may never be the same again!

Write us at nachycast@gmail.com and grab the show from iTunes or at the link below. 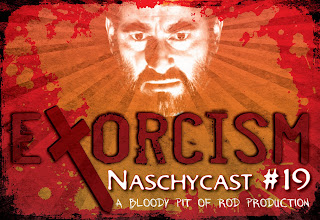 I almost feel that we should apologize for the length of this episode- it comes very close to the three hour mark even though I made a real effort to keep our discussion tight. Clearly it’s just not meant to be. Still- no one has yet complained about the longer shows so maybe the fact that we don’t put out an episode a week allows us to get away with it. If you think we’re getting a bit too long winded please let us know. I can promise that the Beyond Naschy shows will stay much shorter. Really!

We start our dissection of EXORCISM by addressing the elephant in the room- THE EXORCIST. We both greatly admire the Friedkin film and share a brief list of our favorite 1970s horror movies. From there we talk about this rare heroic role for Naschy, the significance of his beard and I tearfully lament the unwanted knowledge of his receding hairline. There are a lot of interesting elements in this movie and I think we manage to hit on most of them although we both stumble when we try to remember the correct word when discussing diegetic music. You’d think two movie geeks such as we would have been able to pull that one up out of our memories with ease! Not even great musical skill can make the old brain function some days. One major area that Troy and I feel a little uncertain about is the details of the Anglican denomination and its rituals and ceremonies. It appears to be very similar to Catholicism but that could just reflect Naschy’s own religious background rather than anything else. Anyone with direct knowledge is welcome to educate us poor, backwoods boys. 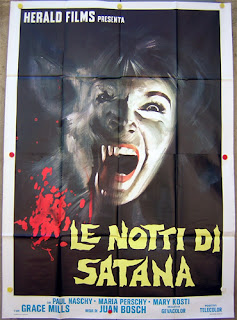 Once again our favorite Spanish Horror star is surrounded by beautiful females including Maria Perschy, Grace Mills, Maria Kosty and that bitch Bork the dog. All of them do a fine job but only a couple of them model two piece swimwear. I guess you can’t have everything. Please write to us at naschycast@gmail.com to let us know how we’re doing or if you have any suggestions for keeping the show shorter. We read all our mail and check in on the Facebook page regularly. Thanks!

Posted by Rod Barnett at 8:08 PM No comments: