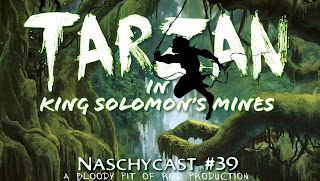 When we started this podcast centered on the works of Paul Naschy I had no idea it would take us to some of the places we have gone. I never expected to delve into an acidic view of religion and human nature filtered through a Medieval tale of ribald wickedness (EL CAMINANTE); a dark but funny look at modern Spanish society (NAKED MADRID);  or a sympathetic look at a real life killer (THE FRENCHMAN'S GARDEN). None of those subjects were on my radar but even they seem like a natural extension of Naschy's career compared to the thought of our favorite Spanish werewolf running around in a Tarzan movie. WTF? How did this happen? 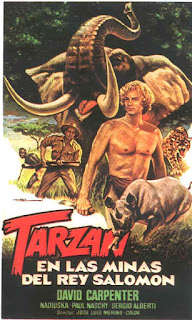 First it must be made clear that Naschy does NOT play Tarzan. There have been dozens of screen Jungle Lords but I'm not sure anyone would have been able to suspend their disbelief enough to accept that peculiar casting. No- in TARZAN IN KING SOLOMON'S MINES Naschy plays the part of the Great White Hunter with criminal intent. He sports a mustache, a rifle, canned meat and the coolest Safari hat in . The movie also stars the dark eyed German beauty Nadiuska in the role of the love interest. She is returning to the podcast for her second appearance in a Naschy film after her work in THE PEOPLE WHO OWN THE DARK.

We doubt much, if any, of this movie was shot in  (other than the stock footage!) but its still a jungle adventure so surely it will be fun. Right? We'll see.  and I discuss our first encounters with the greatest of Edgar Rice Burroughs' creations; good and bad Tarzan actors; favorite versions of the character in film; jungle movies as a genre; etc. We try to stay on track but this subject is fertile ground and there are just too many vines to choose from. Please write and let us know what you think of the show. The email address is naschycast@gmail.com and the Facebook group is in full swing. If you get the show through iTunes please take the time to rate and review us. And thanks for listening!

Posted by Rod Barnett at 8:35 PM No comments: