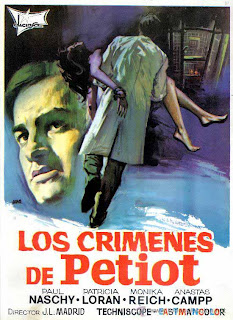 For episode 33 we venture once again into the realms of Euro-Crime to see how the criminal side of life lives. In this case we have a mad killer haunted by 's Nazi past running around  shooting people. His modus operandi is a strange one as it involves always attacking couples and centers on a particular hatred of the female each time. Bizarre!

THE CRIMES OF PETIOT was Paul Naschy's second collaboration with director Jose Luis Madrid. Their two films together were both of the crime story type and centered on deranged killers making eager over thinkers like your humble podcasters wonder about the shared themes that drive some men's art. Could the sublimated desire to act upon dark urges to both reflect the harsh actions of the recent past and repudiate the hideous history of the Second World War simultaneously have caused the growing trend of overly violent movies? Could the creeping misogyny of films that focus on duplicitous women have something to do with the emergent women's rights movement of the 1970s? Or could it just be that killing pretty girls and splashing blood around the screen was a surefire way to get an exploitation film into theaters? I think we all know the answer, huh?

Join us as we march our way scene by scene through this very hard to find film. Have we discovered another little known masterpiece or something further down the scale? For those that want to avoid spoilers we start ruining the reveal at about the 1:33 (one hour and thirty-three minute) mark and finish that kind of talk by the 1:50 (one hour and fifty minute) mark. Make your listening choices accordingly. And please drop us a line at naschycast@gmail.com to let us know your thoughts on the show, Naschy, Spanish Cinema or any other subject that comes to mind. And I'm trying out a new download service for those of you that grab the MP3 directly instead of from iTunes or streaming through Stitcher. The link below will (hopefully) take you to DropBox but if it doesn't work please let me know.