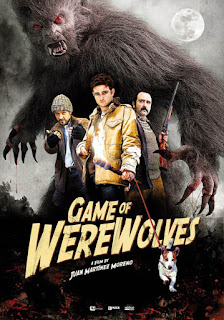 In general, our shows focus on the Golden Age period of Spanish horror but the genre continues to flourish in Spain. Throughout the 90's and on up to today there have been some extraordinary horror movies produced in Naschy's home country including some efforts that were actually copied/remade here in the States. One of those genre films that we've been planning to view for a few years now finally gets our attention in this episode.

You would think that a Spanish made werewolf film would be a natural given the Waldemar Daninsky series being such an iconic part of horror cinema history. But the number of 21st century lycanthrope tales produced there - or, in Europe actually - can be counted on one hand. Luckily LOBOS DE ARGA (2012) found its way through the hell of modern film financing to the big screen. It must have been a hard sell because not only is it a werewolf story but it's also one of the most difficult genre combinations to attempt - a horror/comedy! That doesn't usually go very well. Indeed, the Naschycast's history with Spanish comedy is......... not good. So, what did Troy and I think of this modern monster wolf story that comes spiked with laughs? Listen and we promise not to spoil the film for you. Seriously.

We have a couple of emails that we answer in the final segment of the show including a voicemail from Britain. You can send your comments and questions to naschycast@gmail.com and we'll spill our guts to you next time out. We can also be reached on the Facebook page where interesting links show up regularly. Thanks for downloading and listening. If you like the show let others know about it!