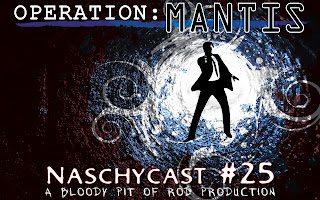 We start our third year of podcasting with a film that Naschy looked back on as a major mistake. Indeed, he called it the biggest mistake of his career and, as you’ll hear, it was certainly an odd choice for a filmmaker of his sensibilities.

OPERATION MANTIS is a spy comedy from a decade that produced very few such movies. That it is also a 'wacky' comedy puts it in the unenviable position of attempting to crack jokes on a variety of subjects in a silly way and the script only fitfully manages to walk that tightrope with any skill. Not that the movie doesn't have its amusing moments. Any film that can boast the sight of Paul Naschy as a caped professional wrestler, Naschy in full clown make-up and (in the maddest scene ever) Naschy dressed as a punk rocker while singing a spastic pop song (!) cannot help but keep you watching. Whether you're watching to see if it will get better or worse is entirely up to the individual but you will never know what is around the corner with this one.

The thinly spread plot of OPERATION MANTIS involves a shadowy, female lead secret organization trying to get its hands on a man-made virus that can destroy the male gender. The evil Matriarka criminal conspiracy intends to reduce the number of men down to only 200 worldwide who will be controlled and used to create the next generation. This dastardly plan only has three agents of the I.A.A.T. fighting against it - one American Military vet; an Italian fashion designer and a gorgeous blonde bikini model. How can the planet's men be saved from the fiendish, but lovely, Mantis?

This bizarre film marked the end of a major era in Naschy's career and he never really recovered. Join us as we pick it apart to see what is there that might be worth discussion. Please let us know your thoughts on the slightly new format for the show and any other thing you might want to talk about. As you will hear in the mailbag section it doesn't take much to get us going. Or at least, it doesn't take much to get ME going. The email address is NaschyCast@gmail.com or visit us on the Facebook page. And if you get the show through iTunes please think about reviewing the show there. It really helps us get some attention.