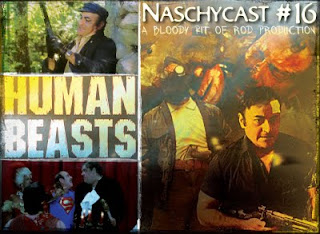 As Naschy entered the 1980s his creative vision took on a darker tinge. Feeling that he had been betrayed by business partners and friends alike he began to see the world in a much more negative light and the movies he produced in this period reflect that. HUMAN BEASTS is a good example of him both stretching into types of storytelling he was less known for and strongly presenting his increasingly pessimistic viewpoint. So intent on making his case he may have overshot the mark for some viewers by underlining some aspects of human nature too heavily but luckily the film remains entertaining even when it becomes a bit too unsubtle. Naschy described this film as a tale of ‘devourers, where in one manner or another, everyone is devoured among themselves.’ In his autobiography he states that he was very pleased with the film ‘which, like EL CAMINANTE, sums up my position as regards human behavior.’ Having now watched those two film within just a few weeks of each other I think I would do well to watch a marathon of Looney Tunes just to reorient my outlook on life! Whoa!

Troy and I have a good time dissecting this one. We each find problems and strengths in both the broad strokes of the story and the peculiar details that sometimes seem absolutely pointless. Fascinating and dark, HUMAN BEASTS is a good film but neither of us feel its one of his best works. It shows an ability to stretch both behind the camera and in front of it that should have made the 1980's another series of cinematic triumphs for Naschy. That his luck and the vagaries of fate were to hamstring his career by the middle of the decade might be seen as the natural outgrowth of the cynical view of life on display here. Still, for any fan it is essential viewing and quite rewarding as a study in its variations on themes he had worked with a few times before. 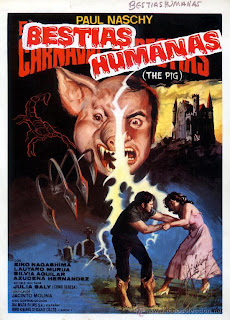 Please let us know your thoughts on the show, Paul Naschy and which Jess Franco film we should cover in our next Beyond Naschy episode. Write us at naschycast@gmail.com or drop us a comment on the Naschycast Facebook page. Thanks to everyone for the encouragement. This is a labor of love but it is still work.