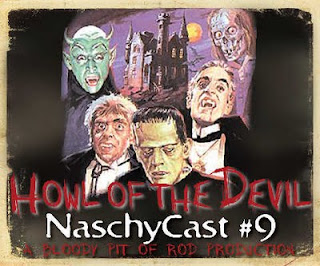 A spoiler free Naschycast? How is that even possible? Well…...it’s complicated. October brings podcast number nine (number nine) focusing on our first 80s film from Mr. Molina. Described by Nashcy as “a howl of anguish, a painful catharsis which finally liberated me from long repressed phobias and obsessions” HOWL OF THE DEVIL is a harsh stab of cinema violence directed at his critics and his own alleged failings and comes on like the meanest version of horror that he could muster. A fascinating film, full blooded in its depiction of human cruelty it serves as a fascinating look back at Naschy’s career up to that point and a dark goodbye to that fertile period as well. An essential film if a deeply flawed one.

Please let us know what you think at naschycast@gmail.com and remember the show is available at the iTunes store as well as at the link below.

As HOWL OF THE DEVIL is a hard to find title we’ve decided to be as careful as we could in our discussion so others can discover the many surprises it holds. This is a film with a lot to say even if sometimes what it says might not be pleasant or kind. Adding to the discussion we have a surprise guest!