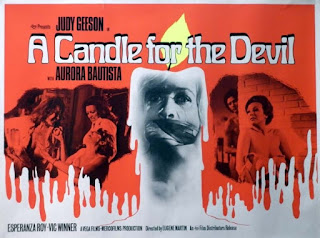 While most films made in during The Golden Age of Spanish Horror could be seen as comments about the repressive fascist government of that country, few films so blatantly addressed the clash of conservative ideas with modernity as A CANDLE FOR THE DEVIL. Set in a small country town outside of , the film casts two middle aged spinsters as hypocritical defenders of the old ways. These sisters make their living running an inn that seems to mostly attract young, sexually liberated women. When an accidental death is interpreted to have been divinely intended, the ladies dispose of the body and pretend nothing happened. Their rationalization is that if God wishes them punished, it is his will. But crime often has unexpected consequences so soon the duo's lies are piling up as well as more young corpses. Is there any horrible act for which these two deluded women can't find a religious justification? Time and the symbolic secrets in the cellar will eventually tell all.

The Golden Age of Spanish Horror is renowned for it's variations on classic monster movie tropes but there are other less well remembered sub-genres that got attention as well. Although this film could be easily seen as a proto-slasher it also fits nicely into the short lived Psycho-Biddy or Hag Horror genre best exemplified by WHATEVER HAPPENED TO BABY JANE (1962). We discuss this film's connections to that long dead type of scary movie noting the specific Catholic tone imparted by the influence of the Spanish government. This was director Eugenio Martín's second horror film after the exceptionally fun HORROR EXPRESS (1972) showing that he had the touch necessary for the genre. His marriage to Lone Fleming also explains her very sexy presence here. The entire very talented cast comes under discussion as we marvel at the female performances and wonder at Vic Winner's inability to survive a Spanish horror film.

We can be reached at naschycast@gmail.com where we'll be happy to hear from you. Send along any comments, suggestions or questions and we'll try to answer them next month. If you subscribe to the show in iTunes we'd be thrilled if you could rate & review us there. it helps other people discover what we're doing. Thank you for downloading and listening!

Posted by Rod Barnett at 4:27 AM No comments: