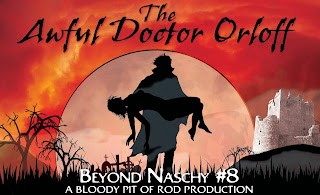 The sharp eyed listener will notice an odd numbering on this episode so I must explain things. As we move through our fourth year of the Naschycast we are going to be occasionally spreading our wings wider to embrace more Spanish Horror than ever before. We started doing shows we called Beyond Naschy episodes a couple of years ago to cover some of the great films of the genre from Spain - TOMBS OF THE BLIND DEAD, HORROR EXPRESS, etc.- as well as lesser know examples - I HATE MY BODY, CUT THROATS NINE. We did seven previous of these shows and have been hoping to return to talking about non-Naschy movies sooner than now but time is a precious commodity. Now we have decided to fold the Beyond shows into our regular schedule to supplement our Naschy coverage and to talk about the less well known corners of Spanish Horror. Of course, THE AWFUL DOCTOR ORLOFF is far from obscure in Euro-Horror circles but its new Blu-Ray release is cause enough for discussion. So- Beyond Naschy #8!

and I delve into this beautiful, haunting black & white film with real joy. We find much to chew on from implied incest to dull protagonists to colorful secondary characters to mysterious motivations. We don't spoil the ending but we do talk about most of the characters in depth with our thoughts on their desires and competence.  Many questions are asked such as- Is this film one of the great links connecting the classic Universal Monster films to later splashes of the grotesque that Euro-Sleaze would bring to screen around the world? Is Howard Vernon one of the coolest mo-fos of all time? Does Franco know how to photograph beautiful women? I think you know the answers! Join us for a creepy night of horror, blood and a bit of nudity.

You can contact us at naschycast@gmail.com or Like us over on the Facebook page. If you subscribe through iTunes take the time to rate and review us over there - it really helps us out. Thanks for listening!

Posted by Rod Barnett at 3:55 PM No comments: