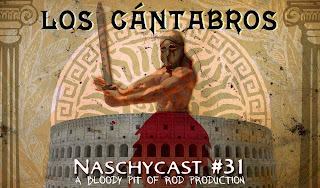 When we started this podcast we had no idea that we would eventually be reviewing a sword and sandal film. We knew that we would be delving deeply into Paul Naschy’s list of credits and seeing movies that were going to be new to us but the number of surprises has been stunning. Thrillers were expected and crime movies were a given along with the obvious horror output but the comedies were a shock and this film has to be acknowledged as a major unexpected revelation. Strangely, and I disagree on the film’s quality level but the discussion finds us agreeing on more points than you might expect.

Couched as an historical account of an odd moment in Spanish history LOS CANTABROS is the tale of Roman conquest in 29A.D. (or was it 32 B.C.?). While there may be much doubt as to the facts surrounding the film’s hero Caracotta there is ample historical record about Naschy’s Roman General Marcus Agrippa and his relationship with Emperor Caesar Augustus. Naschy’s re-tooled screenplay uses a lot of detail from history to obscure the unfortunate fact that this was a very low budget production. This sometimes works to benefit the proceedings and sometimes it really doesn’t. Really- it doesn't!

We relate what little we could discover about the film’s history, talk about its bizarre tone shifts, wonder why certain actors were in particular roles, question the apparent patriotism in the film’s speeches and bitch about the crappy print we have to watch - all while dissecting this hard to find would-be epic. As always the show is available from the link below or through the iTunes store or streaming from Stitcher Radio. We do prattle on! You can drop us a line at naschycast@gmail.com or join us over on the Facebook page.