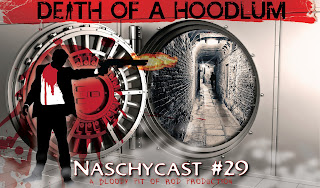 Episode #29 focuses on a lesser known Naschy crime film that turns out to have quite a bit in common with a couple of his other non-supernatural thrillers. Even with several familiar elements the film turns out to have more than a few surprises in store for us including some shocking slow-mo violence. I guess the influence of Peckinpah's THE WILD BUNCH was still playing out in the mid-1970s - and I have no problem with that!

In this one Naschy plays a hearing impaired thief with a nasty mother fixation and the sexual charisma of Sean Connery. I'm not kidding. His character seems to be able to have his way with almost any and every woman he sees- which isn't all that different from most characters he played, but in this story its a little scary.  He's a cold bastard and the film's violence always stems from the relentless nature of his drive to get what he wants.

The film boasts good direction from our old friend Leon Klimovsky, Julia Saly in a red bikini and an excellent performance from actress Carmen Sevilla. The performances are actually very good in every case in this one. DEATH OF A HOODLUM is a pretty good combination of crime tale and domestic drama with just a twisted touch of a distressing coming of age story. Its a strange stew but in general it works so join us as we talk our way through it discussing all points large and small.

You can write us at naschycast@gmail.com to give us your thoughts on all things Naschy or Spanish Horror in general. If you don't want us to include your email as part of the show please be sure to let us know. You can also find us over on The FaceBook at the NaschyCast Fan Page as well so there really is no excuse not to contact us!

Posted by Rod Barnett at 9:29 AM No comments: