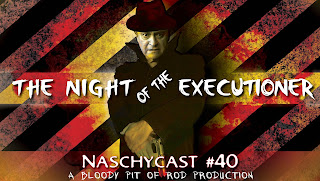 THE NIGHT OF THE EXECUTIONER was the last film Paul Naschy directed before his decision to helm EMPUSA in 2010. By the 1990s he knew the most fruitful days of his career were behind him and I'm sure the opportunity to be back in the writer/director/star position was exciting.  He explains the dual genesis of this tale of vigilante justice in this autobiography so its clear that he felt inspired to create the film even if, in the end, it is a bit too much like other movies in the genre.

and I discuss this low budget excursion into the dark heart of Spanish criminal life while touching on the justifications a victim has to exact vengeance. We even attempt to wrestle with the moral complications that come with living in a society where justice is handled by the government and the liberal vs. conservative arguments on the subject. But not to worry- we spend much more time talking about DEATH WISH, DIRTY HARRY and our mutual love of 1970s Charles Bronson movies. Somehow we are also prompted by this movie to talk about the gender structure of criminal gangs in SUDDEN IMPACT and CLASS OF 1984! Don't ask why- just listen and all will be made clear. And for those interested, my cat Katie makes her presence known multiple times throughout the show as she tries to distract us from our podcasting and/or influence our opinions. She's a good cat but a bit of an attention hog.

The mailbag section is great this month with a few good points made by listeners and a much deserved correction made on my sad mispronunciation of the lovely Nadiuska's name in last month's show. I can only throw myself on the mercy of the Naschy fans and promise to do better next time. As always the show is available from the link below or through the iTunes store or streaming from Stitcher Radio. We do prattle on! You can drop us a line at naschycast@gmail.com or join us over on the Facebook page and leave us a review in the iTunes store. Thanks!

Posted by Rod Barnett at 9:18 AM No comments: