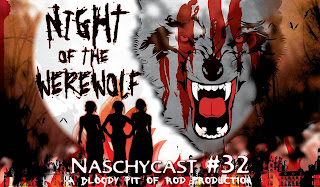 With much joy and some sadness we finally talk at length about THE NIGHT OF THE WEREWOLF. We have been holding off discussing this one for many reasons- its the last of Naschy's werewolf films for us to cover; it's a standout entry in the series; its the only Waldemar Daninsky film available on Blu-Ray; etc. The good news is that it is such a solid effort that repeated viewings only make it more impressive. Many key players return, both in front of and behind the camera making this a fun time for longtime fans but the lycanthropic action is plentiful enough to also make it a good bet for neophytes. This is a big, bold, colorful, violent and atmospheric slice of Gothic Horror and it is a worthy addition to not just Spanish Horror cinema but to the genre as a whole. With Naschy writing the script, directing the film and starring in the title role how could it be anything else but an earnest splash of monster fun?

Naschy really lets his film-fan side show in this one with many nods to older classic horror moments from THE CURSE OF THE WEREWOLF, DRACULA- PRINCE OF DARKNESS, THE MASK OF SATAN (a.k.a. BLACK SUNDAY) and several others. We hope you'll enjoy our conversation on this wonderful film. As we had little feedback in the mailbag we conclude the show with a brief look at the amazing MUCHAS GRACIAS SENOR LOBO book that showcases an extensive collection of Naschy movie memorabilia. Please let us know what you think by dropping us a note at naschycast@gmail.com or joining us over at the NaschyCast Facebook page. Oh- and Happy Halloween!

Posted by Rod Barnett at 7:11 PM No comments: 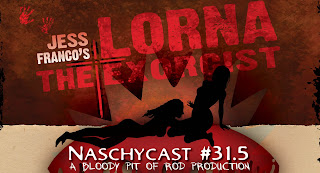 For the first time in many moons we bring you a .5 episode. We have always used these non-Naschy shows to highlight Spanish horror films of note and often there is a connection to the films of Paul Naschy. In this case there isn’t a direct association but we decided to cover LORNA THE EXORCIST for different reasons - not because of its Spanish born director Jess Franco but because of its lovely star- Lina Romay. When Miss Romay passed away earlier this year  and I were stunned, as were most of her fans. We had no idea she was in ill health and her most recent public appearances with longtime companion Franco had shown us the typical smiling, supportive lady we’ve come to know and love. As fans of her beauty and her screen talent we felt we had to do something to mark her passing and with this film we feel we’ve found a very good piece of work to discuss. Little seen for decades LORNA sports a brave, nuanced performance from Lina and, barring a sub-plot we found questionable, it is an excellent example of Franco’s 1970s Franco low-budget transgressive esthetic. We were thrilled to have the opportunity to sing her praises and we hope everyone will get some enjoyment out of our conversation.

We had a lot of fun talking about the film's Faustian plot, interesting sea imagery, strange locations and copious nudity. Did I mention the nudity? Oh- and I manage to create a new descriptive phrase I expect will sweep the nation in the coming weeks- 'Obliquely Clear!' Start using it now and avoid the rush.  I think we covered most aspects of the movie pretty well but if you have something to add (and we hope you do!) please write us at naschycast@gamil.com and let us know how you would rate this intriguing effort. The mailbag section is petty amazing this time out with me going off on a rant about the Universal Horror Blu-Rays and - in a real surprise-  rants about Gamera DVDs.  Will wonders never cease? You can find us over on the NaschyCast Facebook page or at the email address above. The show can be downloaded from the link below, found in the iTunes Store or streamed through Stitcher Radio.

Posted by Rod Barnett at 4:36 AM No comments: