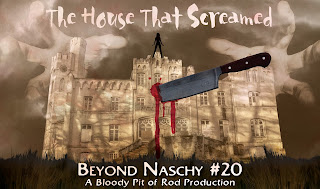 Writer/director Narciso Ibáñez Serrador only made two feature films and in this episode we cover the first. THE HOUSE THAT SCREAMED is a carefully paced tale of sexual repression and murder in an all girls school and if that makes you think of a much more famous European genre film from a few years later you might be onto something. As we go through this film we point out some of the movies that seem to have been influenced by THE HOUSE THE SCREAMED as well as a couple of movies that might have served as influences for this under known classic. Set in in the late 19th century it shows a depth of period detail both in the house itself and in the authoritarian culture it is commenting upon. Often seen as a proto-slasher, the film was known as LA RESIDENCIA in it's home country and under some truly bizarre titles in other places around the world.

The film is elevated by a talented cast lead by the legendary Lilli Palmer as the strict headmistress in charge of a few dozen 'troubled' girls placed in her out-of-the-way boarding school.  As these girls range in age from about age 15 to 21 you can imagine what some of the problems might be. Spanish actress Cristina (THE LIVING DEAD AT MANCHESTER MORGUE) Galbó plays the newest student enrolled and serves as our proxy as she learns about the place's dark secrets. British actress Mary (CRUCIBLE OF TERROR) Maude is Irene, the student most trusted by the headmistress to help keep the other girls in line, which she does in some often harsh ways. John Moulder-Brown plays the overprotected teenaged son of the headmistress who spies on the girls but is forbidden to associate with them. And NaschyCast favorite Victor Israel turns up as the school's all-purpose handyman who just might be the killer!

Join us as we dive deep into this one with our observations ranging from the cerebral to the silly. We certainly take great delight in the beauty and intelligence on display in the film and we don't just mean the lovely cast or exemplary acting. This is one of the finest films we have yet to cover and we hope to encourage you to seek it out.

We can be contacted at naschycast@gmail.com or over on the NaschyCast FaceBook page. Let us know what you think of this or any other Spanish horror films. Thank you for downloading and listening.